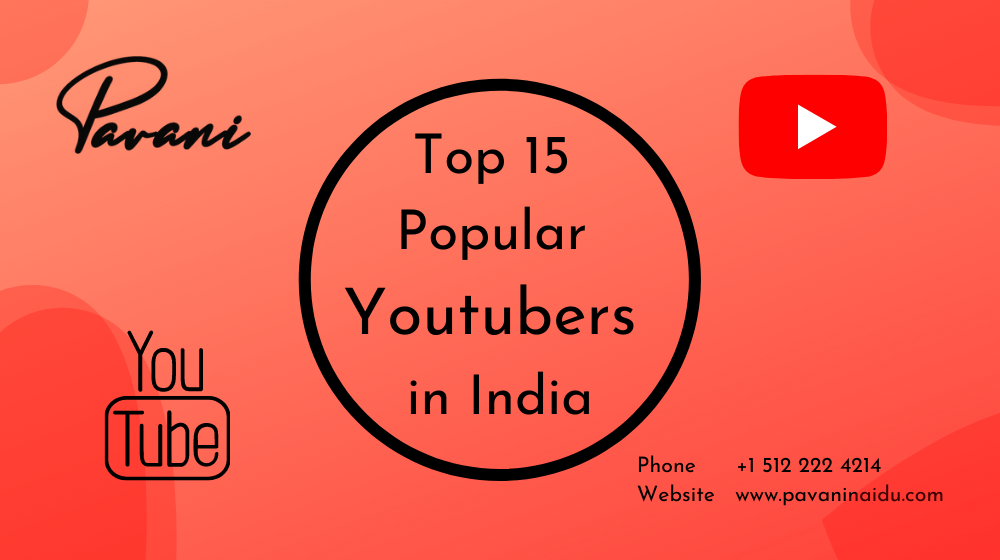 As of January 2018, there are over 450 million active Internet users in India. And more than 1.5 billion users worldwide watch millions of videos and generate billions of video views on YouTube every day. Today, the best YouTubers and content creators in India have a larger audience than the population of some countries. Many YouTube stars get more views than some popular TV shows in India. As the importance of YouTube increases, many people take up YouTube as a full-time profession.

With over 10 million subscribers, Amit Pathana is very popular in the YouTube community and he has become one of the top 15 Indian YouTube superstars and one of the best YouTubers in India. Amit was afraid to tell them because his parents did not know when he started the YouTube channel. As with any typical Indian middle-class family, it was difficult for him to persuade his parents to make YouTube a career.

With over 9 million subscribers to his channel Technology Guruji, Gaurav Chaudhary is one of the most popular YouTubers in India and one of the most popular YouTubers. Gaurav created his YouTube channel Technology Guruji in 2015 and started releasing videos in Hindi that talk about technology, smartphones, reviews, unboxing, etc.

Ashish Chanchlani is one of the best YouTubers in India and has created a YouTube sensation with a history of his family working in Bollywood. His family supported him a lot in his career. Ashish launched his YouTube channel in 2009 and he was loved by the people because of his original quality content and humorous parodies and he is one of India’s Most Popular YouTubers.

Sandeep is the CEO of imagesbazaar.com. Sandeep started his career as a photographer in 2000 and has worked as a freelancer in several small businesses. Then in 2007, he had to sell his camera to join a marketing company called Japan Life. Sandeep started a company writing a book on marketing in 2003, but again he had to close the company very soon. Then he commenced imagebazaar.com as he found out about stock photography.

Nisha Madhulika, 59, has been doing amazing work as a YouTube content creator. It has been 7 years since he uploaded his first video and he has come a long way, where his YouTube channel is one of the most subscribed YouTube channels in India with millions of subscribers. But before that in 2007, she started writing about cooking on her blog, and her passion and love for cooking made her our beloved Nisha Madhulika aunt. He always wanted to do something for people, and he would give home teachers to poor children.

Vidya Iyer, better known by her stage name Vidya, grew up in Virginia, USA, and now lives in Los Angeles. Fluent in English, French, Tamil, Telugu, Hindi, and many more. She was a 5-year-old girl when she started singing.

Dr. Vivek launched his YouTube channel in 2013 and since then he has been reaching out to millions of people with his speeches and promoting millions worldwide, and now he has over 5 million subscribers from 190 countries. Even the consulting academy called Dr. Vivek Global ACT.

Harsh Beniwal is a popular Indian wine star, YouTuber, and actor. Harsh discovered his interest when he joined a dance club, then he went straight into the world of acting, and he wanted to become a hobbyist. His dream is to become a successful star in Bollywood. Soon he discovered dubsmash and he tried many fun things, which made him popular on all social media channels.

Ajey Nagar is best known for his YouTube channel “Carry Minati”. Ajey has become one of the most popular YouTubers with his amazing voice. Most of the Carry Minati videos are about clips of gameplay, rants, and viral videos. Ajey, who was halfway through a college course from DBS in Faridabad, was studying 12th in the art department and later completed his 12th in distance education.

Grandpa Kitchen is a YouTube channel on how to cook and Grandpa is a grandfather over 70 years old. Grandpa makes food YouTube videos, not just for Instagram or social media, to fill the stomachs of orphaned children and make them so happy. He makes all kinds of cooking tips you can think of.

Ranjit Kumar is from Hyderabad. He is popularly known by the name of his YouTube channel “geekyranjit “. Ranjit is a technology geek and his passion for technology and gadgets from his childhood made him one of the best YouTube stars in India. Ranjit realized his love and interest in technology only when he was 12 years old. Later he learned computer programming in his youth.

Shruthi was born in Jhansi, Uttar Pradesh. She has been very creative since her school days. As a middle-class woman, she grew up with the usual thought, “I have to be an engineer or a doctor to succeed in life and get financial security.” That’s the way she bought it.

Nikhil Anil Brijlal Kumar Sharma, popularly known as “Mumbiker Nikhil”. Nikhil studied hotel management at the Rizvi Institute of Studies and Research in Mumbai but did not finish it, the reason is unknown. Then in 2007, Nikhil got the opportunity to work as a flight attendant on Qatar Airways and moved to Doha, Qatar. After staying in Qatar for 6 years, Nikhil returned to Mumbai to pursue his acting career and tested his luck. But unfortunately, he could not do much in his acting career.

Anisha Dixit is a Vlogger, comedian, and YouTuber. Anisha was born in Germany and, after high school, moved to Switzerland to continue her studies. Later, he moved to India permanently. Anisha is popularly known by her channel name “Rickshawali”. He calls his subscribers ricksters, and his videos are filled with funny skits and comedy vlogs with jokes. All ricksters are very loyal and enthusiastic about rickshawali. Anisha talks about cultural differences, regular relationships, Indian woman’s struggles, and sex education.

Who is most subscribed Youtuber in India?

What is the income of CarryMinati?